Vineyards for Sale in Portugal

Dreaming of owning a vineyard in the sunny Mediterranean? Well, there are vineyards for sale in Portugal that can cater to this desire. The Portuguese climate makes for some of the best wines in the world. Indeed, many winemakers from California are opting for Portuguese grape varieties for their vineyards.

Vineyards for sale in Portugal

So, where can vineyards for sale in Portugal be found? From the Douro Valley in the north of the country to the Alentejo closer to the south, Portugal has an array of optimum locations to own a winery. In this article, we will provide you with an overview of the history of wine in the country. Following this, we will delve into some of the most desirable locations for vineyards in Portugal.

History of wine in Portugal

Portugal and vinho (wine) go hand in hand. Indeed, wine is very much part of the fabric of Portugal. As such, many families have small plots of land where they grow various grape varieties, fruits, and other produce. However, in the past decades, the EU revolutionized the winemaking process, upgrading the trellising system. Nonetheless, in many of the smaller villages, the traditional process of grape growing remains very much alive.

The first winemakers of Portugal 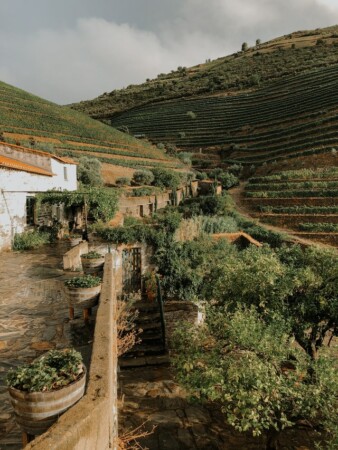 Wine in Portugal goes back a long way, to 2000BC. The Tatressians cultivated wine for the first time in the Tejo and Sado valleys. Following this, the Phonecians seized the trade from the Tatressians around the 10th Century BC, including its wine, and it’s believed that they brought new grape varieties with them. Up until this time, wine cultivation in Portugal was very much concentrated in the south of the country.

The Greeks, Celts, and Romans spread winemaking in Portugal further North. From the 7th Century, the Greeks roamed the Iberian peninsula and brought the varieties of vineyards that they cultivated. These “Iberians” became one people with the Celts, ancestors of the Lusitanian – the Celtiberian – when they arrived in the 6th Century, bringing with them new techniques to winemaking.

The warrior expansion of Rome led to them finally securing the peninsula for themselves. They renamed the area Lustiana after Lusus, the son of Bachus, the Roman God of wine.

The expansion of the Roman Empire is very significant for modernizing wine cultivation in the country. They were responsible for bringing in new techniques and grape varieties. As wine consumption in Rome increased, its own production mechanisms were not sufficient to meet the increased demand. As a result, wine was frequently sent from the Iberian peninsula to cater to this demand in Rome.

England and Portugal have long had a close relationship, with Portuguese wines shipped to England for the first time in the 12th Century. Trade continued with the popularity of Port wine in England at the start of the 18th Century.

Portugal’s ascension to the EU in 1986 opened the doors to grants, financing, winemaking techniques, and facilities. This enabled the wine trade in Portugal to trade with the rest of Europe. Today, Portugal is home to unique grape varieties. Wines from the Alentejo, Douro, and Vinho Verde regions are internationally recognized as being amongst some of the best in the world.

Vineyards for sale in Portugal: Practicalities

How much do vineyards for sale in Portugal cost you? 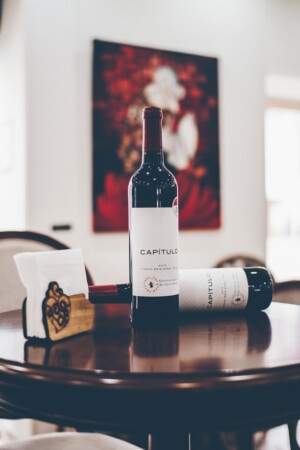 The price of purchasing a vineyard in Portugal will inevitably vary, depending on the size of the vineyard, in addition to the winemaking equipment. In 2017, Sir Cliff Richard put his vineyard in the Algarve up for sale for around €87.2 million euros. Today, you may also be in a bidding war as there has been increased international demand for Portuguese vineyards, particularly amongst Asian buyers.

However, a farmyard with land suitable for growing wines can cost you a more modest €400,000. For an existing vineyard, with the equipment and premises, this will cost you around €1 million.

As vines grow best in sunny climates, vineyards are normally incredibly beautiful properties and they provide something a little different, and a bit more special, to other types of property in Portugal. Furthermore, if you are looking for a place of luxury, and a suitable challenge, then maybe you can fulfill your younger dream and make owning a vineyard your new reality.

Vineyards for sale in Portugal: Other considerations

It is important to note that you cannot simply purchase land and plant vineyards. In Portugal, there is a quota, which means that if you would like to purchase or set up a vineyard, you will need to buy the rights from someone else.

It is a good idea to seek expert advice that can help you with these matters, including the licensing, legal aspects, and other practicalities of owning a vineyard. There are three key essentials to consider when buying, which you can see in our article here.

The best locations to find vineyards for sale in Portugal

Portugal has the perfect climate for making wine. As such, from the north to the south of the country, there are many beautiful vineyards. Note that there may be vineyards for sale in Portugal that are not in the following regions. 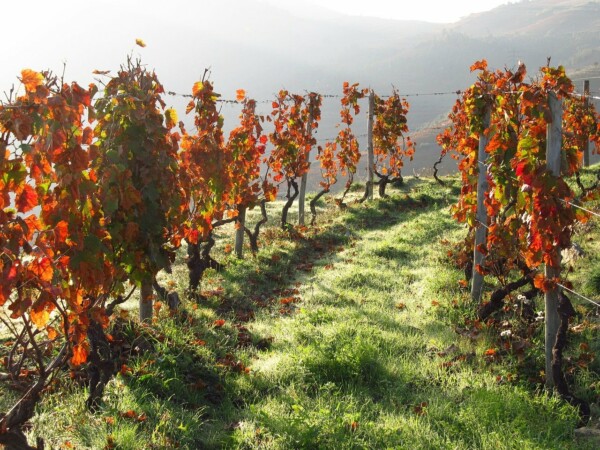 The Douro region of Portugal is perhaps the most well-known area for wines in Portugal. The famous Douro river, the third-largest river in the Iberian Peninsula rushes through it, running all the way from the Spanish town of Duruelo de la Sierra to Porto.

This area is home to some of the finest red and white wines. Alongside this, the region is the home to Port, extremely favored by the British. Indeed, buying a vineyard in the Douro Valley places you in the very heart of Portuguese winemaking. Here you have the perfect soil for a truly unique wine.

There is a key aging process in selected wooden casks in the cellars in Vila Nova de Gaia, overlooking the traditional charm of Porto City. Owning a vineyard close to here would be a very special experience.

The Dão region is located just south of the esteemed Douro Valley and is renowned as one of the chief making regions for Portuguese wines. The name derives from the Dão river, along which most of the vineyards in the area are located.

The Alentejo has previously been nominated as the best wine region to visit in the world, by USA Today. The region occupies over one-third of continental Portugal. As such the Alentejo is one of the most significant areas for wine production.

The warm, dry climate of the Alentejo is perfect for crafting wines. Although not as well known as the Douro in the north, there is now considerable international recognition of Alentejo wines.

If you were to enter any supermarket or wine shop in Portugal and purchase an Alentejo wine, it is extremely difficult to be disappointed.

Vinho Verde, Portugal’s famous “green wine” is cultivated in the Minho province, to the north of Porto and bordering Spain. The modern-day Vinho Verde region stretches to adjacent areas of the south, as designated in 1908 and the old province was dissolved in 1976. However you define the boundaries, the incredible wines in this region speak for themselves.

Vinho Verde is not a grape variety but is a DOC (protected designated area of origin for the production of wine). Vinho Verde is a young wine and it is released three to six months after the grapes are harvested and the wine is consumed soon after bottling.

The Algarve is a very desirable location for expats. Outside the touristic areas, you have lush fertile land that is perfect for cultivating wine.

Indeed, in the past decades, the Algarve region has exploded with new vineyards and they are now amongst the best in the world. As an example, Sir Cliff Richard used to own a vineyard just north of Albufeira in the sunny south. With a hot climate, this area is also a good wine-making region and has many hectares dedicated to the craft. 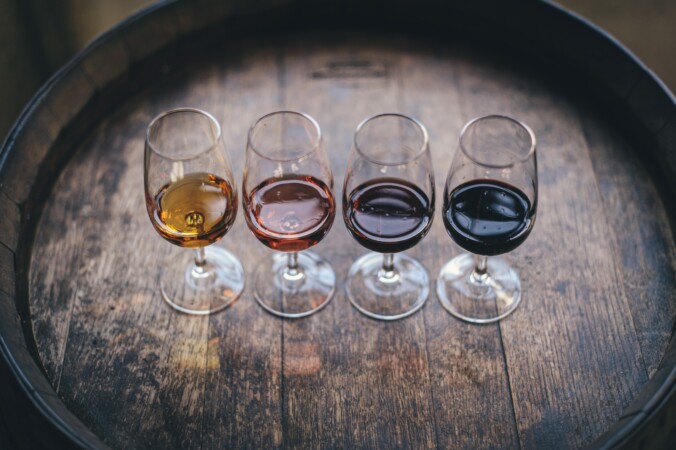 1. Where can you find vineyards for sale in Portugal?

As such, there are many areas where you can find vineyards for sale in Portugal. In the south, you have the Alentejo and the Algarve and in the North, you have the Douro, Dão, and Vinho Verde regions. You also have wines in Portugal close to Lisbon and Setúbal.

2. What should you look out for when purchasing a vineyard in Portugal?

As such, we recommend seeking independent advice on the practicalities. This can include impartial advice on the price, the process of how you will need to buy the rights from someone else to be able to have a vineyard, plus legal and licensing guidance.

3. Is purchasing a vineyard a good investment?

As wine is synonymous with Portugal, it is fairly straightforward to generate a good rate of return in investment, with some marketing and export sales. Additionally, increased demand for vineyards in Portugal at the moment indicates that this is a much sought-after endeavor.