Nestled in the northwestern corner of Portugal, close to the Spanish border, lies Braga, 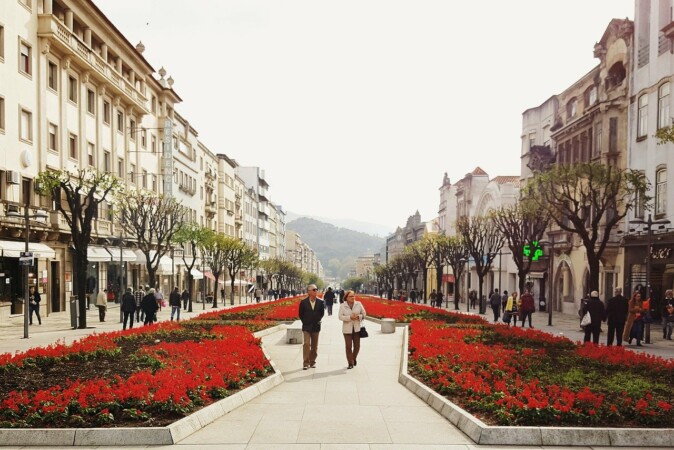 a city famous for its historic monuments, adorning landscapes, and quiet charm. In the first quarter of 2021, Braga has been voted as the best European destination. With this increased exposure and popularity, what does this mean for Braga Portugal real estate?

With over 2000 years of history, Braga is one of the oldest cities in Portugal. Today, you have cute coffee shops, cobbled streets, and top eateries, and there is a relaxed calm to the city that does not seem to be fazed by much. Take time for a café and some delicious Portuguese pastries, perhaps with the chime of the church bells ringing close by.

Braga Portugal real estate will likely become more sought-after in the coming years. At the moment, properties here are very affordable and, therefore, attractive for investors and purchases are likely to increase in the future.

In this article, we’ll provide you with all you need to know about this charming little city in the north. From Braga’s history and cultural significance to information on prices and property types available, you’ll learn everything about this gem in the north. After this, we’ll determine why this part of the country- as opposed to the multitude of other beautiful locations – could be the perfect place for you.

For an overview of everything that you will need to know before you buy, you can see our article here. Also, our guide to finding a property in Portugal can be found here.

The History of Braga

Civilizations in Braga date back to the Megalithic. Here, the region was part of Castro culture and became the domain of the Celtic tribe Callaici Bracarii. Following this, the Roman rule came to the area, pacifying the northern regions. Founded in 20BC, the civitas of Bracara Augusta grew over the first and second centuries and was promoted to the capital of the administrative area in the third century. What is now Braga became known as the “Portuguese Rome ” because of its many churches, chapels, and squares.

Later, the Suebi, a Germanic people from Central Europe invaded the Iberian Peninsula, ultimately creating a kingdom that spanned the north of Portugal, Galicia, and Asturias. Bracara was made the capital of the region, which would be under their control for 150 years. The Visigoths later took over the region, with Braga as its capital.

Braga would go on to be a very important piece for the Christianization of the Iberian Peninsula. Indeed, the first known bishop of the city, Paternus, lived in Braga in the fourth century.

The Moorish conquest, with the brief capture of Braga in the early eighth century, led to a period of decline for the city. However, under the lead of Alfonso III of Asturias and his Christian forces, the Moors were repelled. There continued to be a series of attacks by the Moors until 1040 when Ferdinand I of Léon and Castile and his forces would defeat the invaders.

Up until 1147, Braga developed around the cathedral and became the residential seat of the Portuguese court. The Archbishop remained as the most authoritative figure in the city. As the centerpiece of Christianity in Iberia, the city held a prominent role in medieval politics. For example in assisting in the Independence of Portugal in 1143.

16th Century to the Present

Given its distance from the coast, Braga did not share in the wealth that Portugal garnered from the Age of Discovery. In this, newer seats such as Lisbon, Coimbra, and Évora were favored.

Nonetheless, Archbishop Diogo de Sousa sponsored several city developments. Larger streets, public squares, hospital foundations, and new churches kept the city center modern. The cathedral was remodeled and expanded, with a new chapel in the Manueline style. From these changes, Braga evolved from a Medieval town to a Renaissance city.

Similar developments were made in the 18th Century, with architectural transformations in the Baroque style. This included churches, the municipal hall, public library, and the Sanctuary of Bom Jesus do Monte (a must-see if you are in the area). These renovations provide Braga with a taste of different architectural styles that make up present-day Braga.

The Battle of Braga took place in March 1809, when French troops took the town. During the subsequent Peninsular Wars, the city was relegated to its provincial status. The second half of the 18th Century saw new money and tastes instigating improvements in the city’s architecture and infrastructures. The 20th Century saw similar bouts of growth and decline, changing demographics and infrastructure to cater for increased demand. 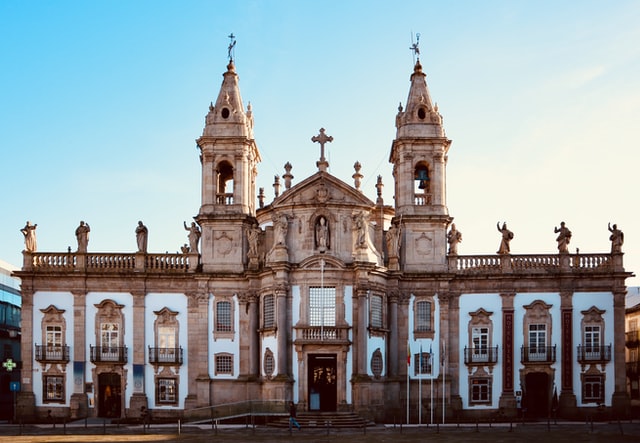 These days, Braga still delights in its historic monuments, but also in its food and culture. Try the Francesinha (a meat-stuffed sandwich with a truly spectacular sauce), typical from northern Portugal, or dip into any of the local cafés for a sweet treat.

The city center retains its local feel and strangely still has the vibe of a small village. Indeed, the absence of large supermarkets has allowed local stores to flourish. After a few visits, you feel very much a part of the community, something that is missing in many other cities of its size.

As in any part of Portugal, art, music, and history are important aspects of life. You will 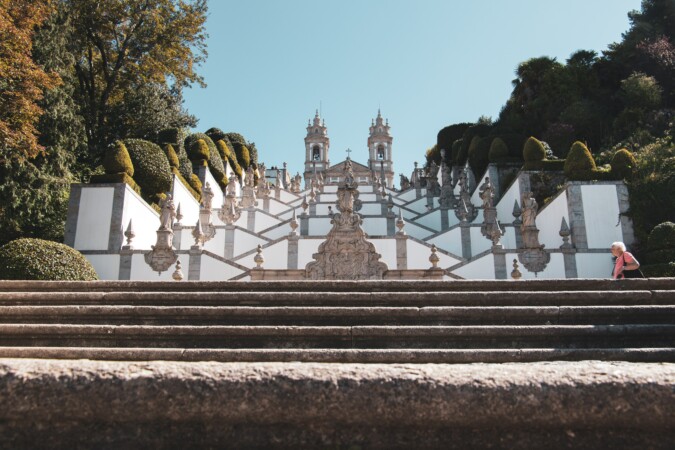 regularly see art exhibitions, music concerts and there are many museums to dip into depending on your interests. In addition, the cathedral offers spectacular views of the city and the surrounding landscapes.

Note that Braga does not have the thriving music and culture scene you will find in Lisbon and Porto. You will however find more localized and small-scale art exhibitions and museums that are just as enjoyable.

In Braga, you are close to the Sanctuary of Bom Jesus do Monte, located on the slopes of Mount Espinho. As a UNESCO World Heritage site, it is well worth visiting this baroque-style sanctuary with surrounding gardens that were curated 600 years ago.

Braga Portugal Real Estate: Why Buy in the North?

The North of Portugal is not as well-trodden as other parts of the country. Look past the hotspots- Lisbon, the Algarve, Porto – and you have beautiful properties, spectacular landscapes, and quieter cities. Indeed, the Algarve is expat-heavy, Lisbon is a international hub and Porto is fast becoming an investor’s dream.

If you would like a taste of the true Portugal, which is quieter and more relaxed than its larger counterparts, cities such as Braga offer this.

Additionally, Braga has been named as the best European destination for 2021, indicating its increased popularity and international recognition as a beautiful city.

If you are looking to buy property in Portugal, the process is pretty straightforward for foreigners. However, it helps to have a simple guide that you can refer to in order to make buying a property as hassle-free as possible. Goldcrest, your real estate professionals based in Portugal, have done just that in our new e-book that features an easy six-step guide to making the process of buying a breeze.

To provide you with an indication of the prices of properties in and around Braga, here are some prices for the different property types. Please note that these are example prices. 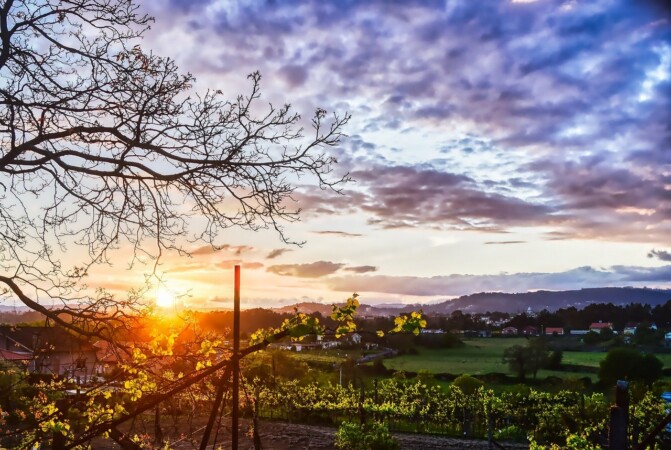 The Portugal Golden Visa is for people who want to invest in the country, whether it is through the establishment of a firm, the acquisition of real estate, an investment fund, the transfer of cash, or the support of the arts, science, or the preservation of the natural heritage.

Regarding residential real estate, in order to qualify, the property has to be located in a designated interior area. If it is also located in a low-density area, then a 20% discount will apply. There are no location requirements for commercial property (i.e. they can invest anywhere in the country).

The D7 Visa is the best choice for you if you have a reliable passive income. This is a popular choice for retirees who want to escape the high expense of living in their home country and take advantage of Portugal’s sunshine and high standard of living.

The Cost of Living in Braga, Portugal

The good news is that living in Braga, Portugal, is fairly affordable, especially when compared to the cost of living in other western European cities.

In Braga, Portugal, real estate for rent is more affordable when compared to Lisbon. According to numbers given in Numbeo, the initial monthly rent for a one bedroom apartment is approximately €430, and the monthly rent for a three bedroom apartment is approximately €725. Like in most other cities, rental costs will drop as you move further from the city center.

If you live in the city’s heart, you can get around more or less wherever you want by foot. The closest airport is in Porto, which is also easily accessible by train, and there are good bus links to move throughout the area and nearby towns.

Grocery shopping in Braga is less expensive than in most other European cities. Continente, Auchan, Pingo Doce, Lidl, and Intermarché are the major grocery chains present in Braga.

If you want to eat out, restaurants are relatively inexpensive in Braga. You can find excellent food and drink across the city. Try the Francesinha, a sandwich with meat inside and a particular sauce that is typical of northern Portugal, or visit a local café for something sweet. You will have plenty to enjoy in the north of Portugal when it comes to gastronomy, which is said to  offer some of the best food in the country.

In Braga, Portugal, weather is not as warm as it is in other parts of the country, since the region is situated in the north of the country. The short, warm, dry, and bright summers contrast with the occasionally chilly, wet, and partly cloudy winters. Throughout the year, the temperature normally ranges from 6°C (42°F) to 27°C (80°F).

1. Is Braga a good place to buy property at the moment?

The area is one of the most beautiful parts of the country, offering the potential for high investments as the region continues to increase in popularity.

There are many locations close to Braga that are low-density areas. You will be able to find properties that qualify for the Golden Visa following the changes that came into force on January 1, 2022, whereby you can only invest in interior areas. The city of Braga itself is not eligible.

See our article here about the interior areas that remain eligible for the scheme.

Is Braga a good city to retire to?

As Braga was voted the best European destination for 2021, the city itself is extremely beautiful. The surrounding areas offer scenic locations, where you can enjoy the peace and quiet of your retirement. With healthcare facilities close at hand, you will have all the services that you will need.

Braga is perhaps one of the safest cities in all of Europe because of its low crime rate. According to the 2022 Global Peace Index, Portugal is the sixth-safest nation in the world, behind Iceland, New Zealand, Ireland, Denmark, and Austria, making it an excellent place to move to.

5. Are foreigners allowed to buy property in Portugal?

Yes, and one of Portugal’s most attractive characteristics is that there are no restrictions for foreigners looking to buy a dream home in the country. The Golden Visa program is another way in which the Portuguese government encourages foreigners to invest in Portuguese real estate.

A family of four is predicted to spend €1,814 per month in Braga, not including rent. Without rent, the projected monthly expenses for a single person are €517. Compared to New York, Braga is 60.78% less expensive (without rent).

The slower pace of life in Braga as opposed to Porto and Lisbon is undoubtedly one of its charms, even though Portuguese culture in general is usually pretty relaxed. Many foreigners who want to reside in Portugal have expressed interest in living in Braga due to the high standard of living and affordable housing.