São Miguel, the largest and most populous island in the Azores archipelago, is nicknamed the “Green Island” for a reason. With vibrant green rolling hills, grazing cattle, stunning lakes, and spectacular ocean views, one thing is for certain, Once you visit this island, you will not want to leave. When it comes to São Miguel Azores real estate, there are several options to consider. Indeed, if you are looking for splendid tranquility, want to reconnect with nature, or would like to embrace a truly Portuguese lifestyle, then you should consider the Azores – and São Miguel comes highly recommended.

Alongside this, the Azores will remain eligible for the Portugal Golden Visa, which is undergoing significant changes from 1 January 2022. Investors looking to partake in the scheme should consider the Azores as a viable option.

In this article, we’ll run over everything that you will need to know about São Miguel, from the real estate market to the spectacular beauty of the island. If you would like to book a call to discuss buying property in the Azores, then you can book a call here to discuss your options today.

Why escape to São Miguel? 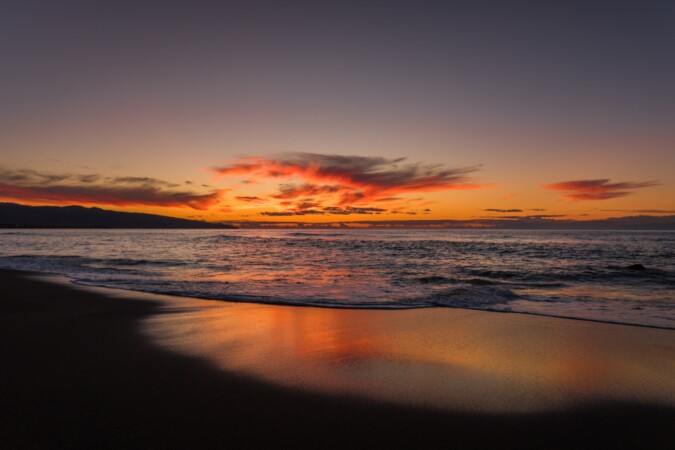 The entire Azores archipelago is wonderful – consisting of nine islands, each with its own unique character, culture, and picture-perfect landscapes, and which total an area of 2,346 km². An overview of the Azores can be found here. In this article, we will focus on São Miguel. São Miguel is located in the eastern group of islands in the Azores archipelago, close to Santa Maria (you can see our article on the beautiful Santa Maria here).

The rolling hills, the many miradouros (viewpoints), and the tranquility of the Azores make the islands some of the most beautiful in the world. Indeed, the island of São Miguel has recently been featured in Forbes as being a location not to be missed.

When it comes to properties in the Azores, what could be better than waking up to the soft sounds of the ocean, while taking your coffee in the sunshine with a bowl of local fruits? Or ending the day with a glass of red wine as the sun sets on yet another beautiful day? The Azores really is a paradise for expats in Portugal, where they can relax in true harmony with nature.

São Miguel has a vibrant and ever-growing real estate market, where you will find all sorts of properties – from villas, apartments, or a townhouse you have many options. If you are looking to move to Portugal and are looking for luxury properties, you will also be able to find prospective options.

While luxury properties are evidently more expensive, buyers will be pleased to know that they are relatively affordable compared to the equivalents in other European countries.

The Portugal Golden Visa is one of the most popular residency-by-investor programs in the world. The scheme provides investors with an array of benefits, including securing an entryway to other EU-member countries.

Changes to the Golden Visa came into play from 1 January 2022. From this date onwards, investors were no longer be able to invest in real estate in the hotspot locations of Portugal, such as Lisbon, Porto, and many coastal areas, including much of the Algarve. The thought process behind this is that the changes will instigate further developments in the interior of the country. The full changes can be seen here.

However, the Azores will remain eligible for the Portugal Golden Visa. Because of this, investments into the islands, including into São Miguel real estate will likely increase in the next few years. Indeed, securing property in São Miguel, along with on the other islands in the Azores archipelago, will be a strong investment.

A history of São Miguel

São Miguel has a rich history, since being discovered by the Portuguese. Here is a brief history of the island and its role in history.

São Miguel became the second of the islands of the Azores discovered by Gonçalo Velho Cabral, to be settled by colonists from mainland Portugal. Although the exact date is uncertain, it is believed it was discovered sometime between 1426 and 1437. The first settlers noted the beauty of the island, covered in ravines warm with sun and with an abundance of trees.

Sometime after the first settlement of Povoação Velha, which was situated on the southeastern coast, a volcanic eruption occurred between 1439 and 1444, in the crater of Sete Cidades, which was, at the time, uninhabited.

In the early 15th century, Infante D. Henrique authorized the settlement of the Azores and many settlers from continental Portugal traveled to São Miguel. The temperate climate and the fertile soils attracted settlers from other countries, including the Flemish and the French. In addition to these settlers cultural minorities, such as Jewish New Christians and Moors were exiled to the island during the inquisition.

The fertile soils allowed for rapid economic growth, and the establishment of a military garrison pushed things further still, opening up trade as the port was a landing point in the African and Asian commercial trade routes. Particularly favored was the exportation of sugar, and later orchil, a dye used in the making of cloth that was exported to Flanders. Indeed, these commodities stabilized the island’s export trade.

The first capital of São Miguel was Vila Franca do Campo, although this city was devastated in the 1522 Vila Franca earthquake and therefore making Ponta Delgada the administrative and economic center from 1546. Later in the 16th Century, during the Portuguese succession crisis, the people of São Miguel came out victorious in the Battle of Vila Franca against a French squadron that supported the claims of the pretender António, Prior of Crato.

With the Portuguese Restoration War in 1640, the island was once again renowned as a commercial and trade center. New contacts were made with Brazil, which was heavily colonized during this time. Many of the island’s historic buildings, such as its churches, date from this period. The island’s architectural changes and expansions largely came from the revenues that were created from exporting oranges overseas, mainly to the United Kingdom.

During the Liberal Wars, following the landing of troops loyal to Queen Maria II, a Resistance to the Absolutist regime in the Azores was organized. In 1832, the militia pledged allegiance to the Charter and Queen Maria, creating a contingent that sailed the continent where they were involved in liberating Porto.

Following the Liberal Wars, the economy flourished and the port of Ponta Delgada expanded, through exporting new crops including pineapple, tea, and tobacco. The development of the fishing industry, expansion of the dairy industry, and cultivating food staples, allowed the population to grow.

After the Carnation Revolution, São Miguel was given the seat of the Presidency of the Autonomous Region of the Azores, located in Ponta Delgada. 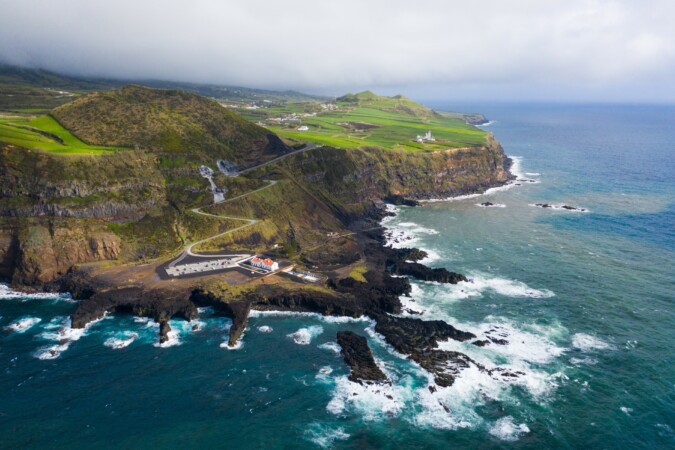 There are several locations to buy on São Miguel and the islands are split into six municipalities – Ponta Delgada, Povoação, Ribeira Grande, Nordeste, Lagoa and Vila Franca do Campo.

Ponta Delgada, the capital of the Azores Islands has many lovely properties that would make a perfect retreat. Here, you have excellent restaurants, fine dining experiences, and traditional Portuguese eateries.

Povoação is also a good location to consider, a municipality in the southeast of the island, where the semi-active craters of the Furnas and Povoação volcanoes can be found, surrounded by beautiful nature – forest, mountains and river valleys to the north and the glimmering Atlantic to the south.

In the north of the island, Ribeira Grande is another option to consider. Mountains and river valleys abound, you also have an excellent selection of beaches here – Santa Bárbara and Monte Verde, Moinhos Beach, and Viola Beach. Even in the winter months, the mild climate and the sheer beauty of the landscapes are sure to get you out of the house.

Vila Franca do Campo is exceptionally beautiful – a small paradise that is located in the southern part of the island. Nordeste is the least populated municipality on São Miguel but is rich in fertile pastureland, with mountain tops and trees galore. Lagoa has the protected area of Ponta da Galera, due to the unique ecology on this part of the island.

If you are unsure where to buy on the Azores, then speak with a Goldcrest advisor, who will be able to provide tailored advice for you based on your needs and what you are looking for – whether it is a holiday home, a place to retire, an investment, or to relocate permanently. You can book a call here. 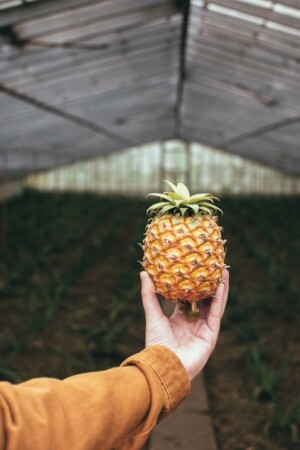 With fresh seafood, an array of activities to enjoy – from surfing and scuba diving to cycling and hiking – you will be able to wake up in the morning, ready for your next adventure. You can also relax in the hot springs on São Miguel. You can unwind completely in the mineral-rich pools and come out feeling completely refreshed. A good place to enjoy the hot springs is Furnas.

The Azores are home to wine production, some of which is exclusively consumed on the islands, plus tea and pineapple plantations, which you can visit and taste the produce. Alongside this, there is an abundance of exceptional seafood and fish dishes that you will have to try (and eat again and again) if you live in the Azores. Indeed, the gastronomy of the Azores is rich and varied – if you move to Portugal, then the Azores contain much to be desired.

Be patient, however, as driving around the island you are sure to come across cattle blocking your way. It is best to simply sit back and enjoy the wait, as from the roadside you are sure to be able to see a beautiful ravine, the rolling hills, and simply admire the wonder of the island.

As the most populous of the Azores islands, São Miguel has three hospitals so you should be rest assured that you will have sufficient healthcare if you move here. If you are a resident of Portugal, then the Serviço Nacional de Saúde (SNS) (National Health Service in Portugal) is your port-of-call, providing healthcare for only a minimum cost. More complicated procedures, X-rays, and scans will require further payment.

There are frequent flights from mainland Europe and you can fly directly from Boston and New York in the United States. When it comes to transportation on the island, it is best to have a car to get around as public transport is lacking a little.

1. How much is São Miguel Azores Real Estate?

2. Is São Miguel a good place for expats in Portugal to live?

São Miguel is a good location for expats in Portugal that are looking for an authentic taste of Portugal, with a relaxed pace of life, an active lifestyle, and some of the most spectacular landscapes in the world.

3. Is São Miguel a good location to invest in?