Planning to move to Lisbon? It’s important to know about the best neighborhoods in Lisbon so you can make an informed decision. Lisbon is a vibrant city that’s reasonably varied in the different areas across the city, each suburb emanating a different energy. The old parts of the city can seamlessly blend into a trendy new development and there is a magic to this type of juxtaposition. Lisbon is sprawling with fantastic eateries at bargain prices, chic hotels, romantic rooftop bars and beautifully dilapidated live music venues. Depending on whether you’re a tourist, an expat or a digital nomad, you’ll probably have a different perception about the best neighborhoods in Lisbon.

What are the best neighborhoods in Lisbon?

The best neighborhoods in Lisbon can be summarized, but each part of town will have its own allure depending on who you are and what you are into. There are certainly the main most-loved districts, for reasons we’ll outline. 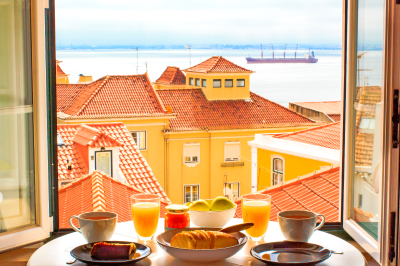 Walking the cobbled streets of Alfama is like stepping back in time into a medieval Portuguese labyrinth. The near-vertical hills are a struggle to climb particularly in the heat of summer, but once you reach the top you are rewarded with panoramic views and flower-clad iron railings. Alfama is characterized by narrow winding streets and colorful miniature doorways as well as numerous wall tile formations so intricate that they can make you feel sentimental.

It shouldn’t come as a surprise that Alfama is hugely popular with tourists visiting Lisbon. Therefore, the majority of those who inhabit Alfama are older Portuguese people and tourists in short-term holiday rentals.

The pros of Alfama could also be related to its cons, as being so beautiful and old it has in some ways become a museum of sorts. While the tourists do dominate Alfama in summer there certainly is life and energy in the district, Fado music and some great wine bars.

Graça is Alfama’s cool younger sister. Just at the top of Alfama, you reach one of Lisbon’s best neighborhoods. Despite being in the old town of Lisbon, there is a wave of young people changing the landscape of this suburb. Graça is equally as beautiful as Alfama but feels more like somewhere that people really live. There is a buzz to this hilltop part of Lisbon, that is perfectly mixed with the charming old squares and miradouros (look out points).

Graça is home to a mix of older locals, young expats and young Portuguese people. This is a top choice of location for digital nomads and entrepreneurs, and you even have an excellent co-working space here called Heden for your working needs.

Ajuda is slightly off the beaten track, as it is past the 25 de Abril Bridge that takes cars and trains across and out of the city to Costa da Caparica. It might in some years be considered as one of the cool neighborhoods of Lisbon. Today, the area is certainly up and coming and as far as snapping up cheaper real estate goes, Ajuda is a good bet.

There is an industrial feel to this part of town, with old warehouses slowly being converted into hip bars and breweries, but the area is still missing some polish that one might be looking for if moving to Lisbon.

Saldanha has an old grandeur to it, from its distinctive secular architecture to the wide streets and sidewalks. The neighborhood is home to several universities as well as being a hub for working professionals. Saldanha is a busy center in Lisbon and has hundreds of young lawyers, consultants, and business people passing through during the week.

The shops in the area of Saldanha are great and you won’t struggle to find all the big brands and labels you could wish for in the area.

Rato is a well-located point in Lisbon, sandwiched between Principe Real and Campo de Ourique. It’s considered one of the best neighborhoods in Lisbon, probably because it is right in the thick of the action. In Rato there is still a sense of calm and tranquility, but it is really about as central as it gets.

You can take a tram to Alfama and Graça from Rato and you can walk to Santos in no time. It’s also possible to walk up to Marques de Pombal in a short amount of time, which is the heart of Lisbon and its business district. To live in Rato, the pros are great restaurants and cafés, a good selection of shops and of course, excellent links to the rest of the city.

What are the nicest neighborhoods in Lisbon?

Avenidas Novas might be considered one of the best neighborhoods in Lisbon as its leafy spacious streets are lined with large beautiful properties. Avenidas Novas begins at the grand Avenida da Liberdade, which is the address that is perhaps most sought after in Lisbon.

The area also has the fantastic Gulbenkian Foundation and its peaceful gardens, a highlight of the city in its district. Avenidas Novas is Lisbon’s business center, with working professionals mainly living in this part of town. At lunch, you’ll see all the café’s and their terraces occupied by those who work in the professional sector of Lisbon.

There are also a couple of high-end rooftop bars with views of the whole city. To live in, Avenidas Novas has something for everyone and has some of the most sought-after real estate in Lisbon. 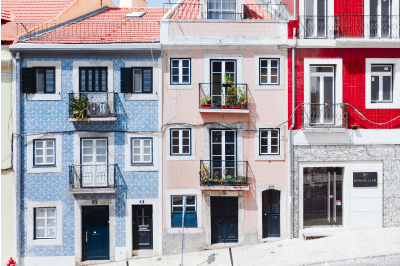 Campo de Ourique is up high on a quiet corner of town and is a very nice family-oriented and posh district in Lisbon. Lovely artisanal shops and an indoor food market are some of the things that make this one of the nicest neighborhoods in Lisbon to live in.

It is also a popular Lisbon expats neighborhood, largely because it is again quick to access the main parts of the city from here and there are plenty of nice café’s and lunch places to hang out in Campo de Ourique.

Estrela is a part of town that has a genuinely warm and relaxing family atmosphere. From the Jardim de Estrela to the array of trendy hipster café’s, many people come up to this part of Lisbon to wile away the days.

There is a more affluent population here, particularly of young professionals and wealthy expats who have relocated for work. It’s understandable that this has become a hot-spot in town, and that Estrela is considered one of the nicest neighborhoods in Lisbon.

Principe Real is a favorite of the savvier tourists and the local Portuguese people alike. The area is pristine and is filled with lovely independent shops and boutiques, great restaurants and bars, and stunning properties. It is certainly one of the more upmarket areas of the busy part of town.

The people living in Principe Real are a mix between young internationals, nomads, and professional Portuguese families. Even Scarlet Johansson recently snapped up an apartment in Principe Real.

What are the quiet neighborhoods in Lisbon? 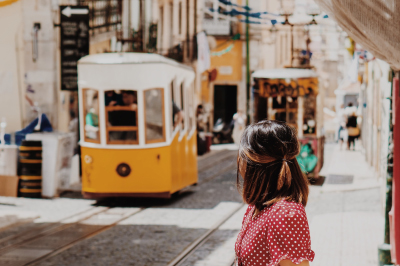 Santos and Lapa are relatively quiet neighborhoods, whilst still offering everything you could desire from a Lisbon neighborhood. There is a pleasant mix of old cafés and charming kiosks here blending with the new and trendy restaurant scene that is emerging, making it also an ideal place for families.

The buildings are well kept and there can be plenty of nice property found here. Expats and entrepreneurs favor Santos and Lapa over most other areas.

Parque das Nações is at a quieter end of town. Situated on the Tagus river, this new development is away from the hustle and bustle of downtown Lisbon where the tourists can be overwhelming.

The new development is popular amongst young professionals and working families as it has a crisp, clean and modern aesthetic to the buildings, where you are sure to find quality property for living and investment purposes.

What are the cool neighborhoods in Lisbon? 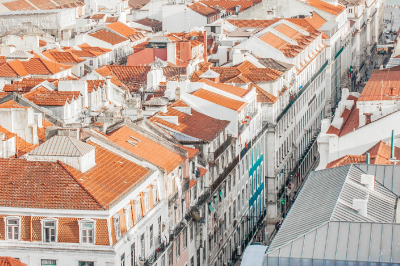 Anjos is a favorite for Lisbon expat neighborhoods. This is partly as Anjos got voted as the coolest neighborhood in the world recently by Time Out. This part of town is still shabby chic but filled with vintage stores, record shops, and a huge variety of different cuisines to sample at low prices.

Some of the streets are a little run-down, but there is huge potential in investments made here. Particularly if you manage to get a property in excellent condition. Anjos is also home to a couple of night clubs, where the party doesn’t stop all night long in the summer months.

In a similar way to Anjos, Intendente and Mouraria are known as the cool places to hang out in Lisbon. There are indoor markets, old cafés to sit with the locals for a coffee and plenty of “clandestine” Chinese restaurants.

The area draws a young international crowd and has a mixture of ages and cultures living here.

To get a better idea about which areas are the best to live with family, check out this helpful guide by clicking here. 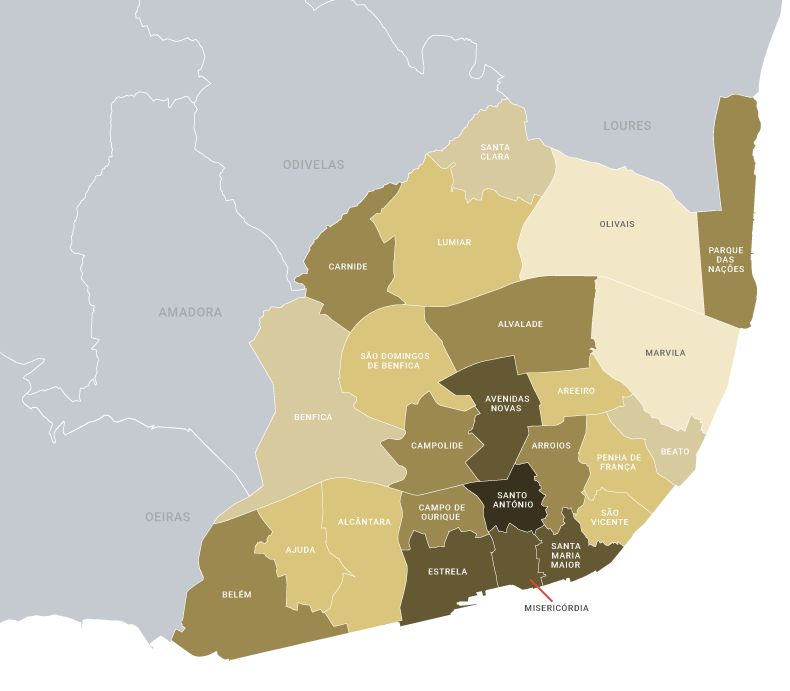 Lisbon neighborhoods are basically divided into metropolitan areas, characterized by seven hills. The city is located on the Western coast of Portugal at the edge of the Tagus river and is in the middle of Portugal between Porto in the North and Faro in the South.

Get in touch with our relocation experts

Goldcrest are property and relocation experts. We can assist you in making the best investment decision for Lisbon real estate. We have deep expertise in the Portuguese real estate market and will always act diligently on your behalf to negotiate the best possible deal for you. If you’re planning to move to Lisbon, we can help.

What is the best neighborhood in Lisbon?

It depends on what about a neighborhood you value most, but the best neighborhoods in Lisbon are often said to be Estrela, Graça and Avenidas Novas.

What is the best neighborhood for families?

The best neighborhoods for families are Santos and Lapa or Parque das Nações.

What are considered Lisbon expat neighborhoods?

Are there any welcoming Lisbon gay neighborhoods?

Bairro Alto neighborhood in Lisbon is a hotspot for night events and clubs and is considered a top gay neighborhood, as well as Principe Real, which is home to some of Lisbon’s best new clubs.

Buying a property in Portugal after Brexit

How to find the best properties for sale in Lisbon